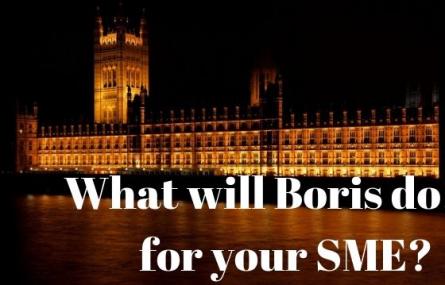 Boris Johnson, PM... but what does this mean for your SME?

Yet what will his appointment mean for your business; one of the 5.7 million SMEs, the backbone of the UK economy?

Well, little has been said about how he will directly help, support and guide SMEs but we do know some of his pledges that will have a knock on effect to SMEs.

In the past he has been very supportive of the SME business community, actively working on enterprises, as the Lord Mayor of London, such as export initiative, the International Business Programme.

He campaigned hard for the UK to leave the EU; so anyone hoping for a second referendum will be disappointed. However, what the majority of SMEs are worried about is how he will play out Brexit and the uncertainty that will bring.

His current stance is to stand hard against the EU. He believes that to leave with a ‘no deal’ is a mere "million to one’ chance". However, he is also staunchly vocal about the fact that if there is no deal come the 31stOctober the UK will leave; holding on to its £39 billion ‘divorce‘ bill. This very action will of course turn the current ripples of unrest and turmoil in the business community into huge waves.

Many key cabinet members are threatening to resign – Phillip Hammond, Chancellor of the Exchequer is one. In a recent campaign, over a third of London businesses said it is political uncertainty that is the biggest barrier to growth, with huge proportions throughout the country also citing this as a reason to doubt businesses growth.

So what does the future for SMEs hold with the new Prime Minister... we’ll see.